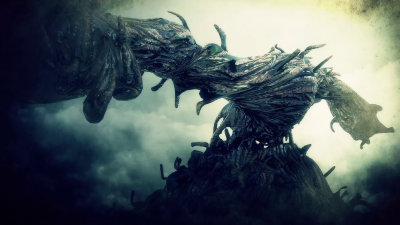 The Leechmonger is very weak to fire, and pretty much everything else for that matter.

It is entirely possible to circumvent this healing altogether. The blob around its core is divided into three sections and as long as these sections remains intact the boss will never heal. To do this the player cannot be locked onto the boss and has to have a weapon with a short swing radius/a thrust attack (Rapiers and even quick jabs (L1) on fists will work for this). Then angle the camera so that you get a bird's eye view of your character, this will make it so that the character swings at the very bottom of the boss and avoids the center. Do note that rolling can destroy center sections. Circumventing the boss' healing is not recommended for normal play as it requires the player to tank every attack the boss throws out and have enough healing items to survive the damage.

Make sure you have some Turpentine or Sticky White Stuff to apply to your weapon, or alternatively use a Dragon weapon (+3 Dragon Sword for instance will make short work of him). Standing on the upper most level will make you safe, so use the opportunity to cast Protection, and if you have a Regenerator's Ring equip that. Then simply go down a level or two until he begins attacking you and walk right up to him and whack him hard several times then roll away as he tries to attack you. He should telegraph his intent to attack rather early and give you a lot of opportunity to move out the way. While out of the way of his attack, by all means use the opportunity to heal yourself if you need to, then return to cause him more pain. You shouldn't need to use many healing items if you focus on attacking him quickly, maybe 2 or 3 max before his soul is yours!

You can find an easy hideout at ground level where the archstone for the next level would normally be. Move toward the fog, passing under some wooden supports. The enclave is a slightly raised spot of land to your left. You can safely use it to refill your mana and health, then move back and forth between it and the Leechmonger. This strategy is not limited to melee fighting.

For all ranged strategies, the idea is to get Leechmonger to continually spit the leech balls. As long as he is doing that, he won't regenerate. So keep healing items on hand, so you can heal up if one hits you. Do not back away, or he will regenerate.

Bow from the entrance - Hyper Mode[edit]

If you have a bow, this is easy. It's not necessary to have a Lava Bow , a Compound Long Bow +3 will do the job. Stay at the entrance. He will regenerate his health quickly, so a trick is to let yourself get to less than 30% health before entering, then equip the Clever Rat's Ring. If you aim for his head or torso, you should do damage. With the Clever Rat's Ring , you should do more damage than he can regenerate. It's relatively easy to get to 30% health, , as there are diseased rats by the filthy woman. If you have a Widow's Lotus , you can heal yourself as soon as you see the rat symbol appear by your buffs.

Note - Its not absolutely necessary to have the Clever Rat's Ring to use the above method on NG. Just bring plenty of arrows (200 to be safe) and at least a Compound Short Bow +3 with dexterity at minimum in the mid 20's and the boss will go down.

On your first play through, in fact, you can easily take him down with about 100 arrows (or less) even with a fairly low dexterity (dex 12 for instance) and a non-upgraded composite bow. If you make your way around the first level, past where the path turns to the right sharply and you cross a chasm, you will approach lock-on range. While locked on, back up against the wall to avoid his ranged attack, then slowly move forward until your arrows connect with him instead of the walkway. If done at the right spot, you can shoot him while his ranged attack will hit the walkway at your feet.

Make your way down to the valley, ALL the way down (just run to avoid leech balls). There are two opposing gaps on the same level as the Leechmonger. (1) is at the Shard of Suckerstone (2) is the space near the Archstone. Feel free to stand below the walkway. The walkway will protect your head from the giant leech balls. Easy to lock-on. Should only take about 1/2 the amount of arrows normally used. (Lava Bow even without the stat requirement and Fire Arrows should only take 20-30 shots to kill ~150 fire damage per shot)

Bow co-op from the entrance[edit]

Note - this will only work if you have a blue phantom in your world doing the same as you. Right when you and your partner walk through the fog, take tiny steps forward until you can get a clear shot at the boss. Then just make sure you have your bow and arrows equipped and start shooting. Just keep tapping that fire button until it's dead and it will be a simple and safe victory. This method only works on the first play through because on NG+ the boss regains health too quickly for most people's bow power.

Note - Check the map, spot 17 with the blue square is safe. As you enter, follow the left path about 20ft until you have a little ledge to stand on almost over him. He won't use his tongue and the leech balls won't hit you either.

Just as with ranged strategies, the idea is to get eechmonger to continually spit the leech balls. As long as he is doing that, he won't regenerate. So keep healing items on hand, so you can heal up if one hits you. Do not back away, or he will regenerate.

Firestorm utterly destroys him. Stand next to him and cast it right after one of his attacks. Usually it only takes one cast, even with low magic. NG+ may take a bit longer. If you need to refill mana or heal, from where the Leechmonger was, go up a ramp and stop when the ramp stops going steeply up (only takes a few running steps). He can't hit you with melee nor can he hit you with his ranged projectiles. Going in Hyper Mode (less than 30% HP with Clever Rat's Ring and Morion Blade) ensures that anyone, even with a low Magic level, will be able to kill him in 1 Shot. Just ensure not to be attacked or cast Second Chance.

From the entrance of the cave make your way left along the wall towards the first small plateau, just after a rocky outcropping beneath you. From here you can target Leechmonger and all you have to do is use Fire Spray continually. He will shoot leechballs at you, but they shouldn't hit you.

From the entrance of the cave make your way to the plateau with the fence at the front. Make sure to equip Insanity Catalyst, Morion Blade, Monk's Head Collar, Ring of Magical Sharpness, Clever Rat's Ring. The game seems to give a very large damage bonus to spells when combining the attack power increase items. The large plateau, fence, and wide walkway down is a good spot for strafing in and out. Depending on which play through you are on, you should finish off the boss in less than 10 hits (NG+3 = 5 casts, for instance).