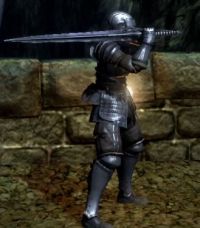 Forged from the soul of the Demon "Storm King," it is actually the marrow of the storm beasts.

These beasts take pleasure in the wielder's peril, and in these situations, the blade's attack power is greatly increased.

1. When two handing this weapon, only 10 Strength is required