Information on the various Shields available

Check the Temporary Weapon Enchantment page for information on enchanting a weapon for additional damage.

A useful Weapon Damage calculator for your character
Original courtesy of kouryakubo, back-up obtained from archive.org
Or, Attack Rating Calculators by Mud 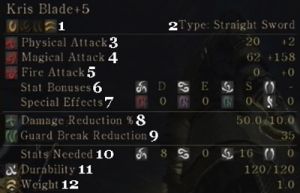 The damage types the weapon deals. From left to right Normal, Blunt, Slashing, Piercing. Different enemies are strong or weak to the various damage types. Pure Physical damage is okay against everything, but not strong or weak to any particular enemy. Some weapons can deal multiple damage types. Each attack from a weapon only inflicts one category of damage. For example, straight sword will use pure physical for normal attacks, and will use piercing for a strong R2 attack; daggers likely use slashing for regular attacks and piercing for strong attacks and backstabs.

This affects the actual attacks you perform by pressing R1 or R2, and if it can parry or block when used in the left hand or two-handed. Some smaller light weapons also deal more damage from parry counters or backstabs.

The first number is the weapons base, inherent attack power. The second number after a "+\-" is the bonus damage it is gaining from your statistics (see 6: Stat Bonuses). In the example shown above, the "+2" is the small damage bonus for that character using that weapon.

Some weapons deal inherent Magical damage. Again, as with physical attack power, this inherent damage may be boosted by Stat Bonuses. If a weapon does NOT already deal Fire or Magic damage, you can enhance it with Sticky White Stuff or one of the weapon enchantment spells to give it a powerful temporary Magic damage boost (only works on enchantable weapons).

Some weapons deal inherent Fire damage. Fire damage is only very rarely boosted by Stat Bonuses. If a weapon does NOT already deal Fire or Magic damage, you can enhance it with Turpentine or Black Turpentine to give it a temporary (but powerful) Fire damage boost (only works on enchantable weapons).

The bonus damage your weapon receives from your statistics. From left to right, the 4 symbols are for Strength, Dexterity, Magic, and Faith. A weapon can have a rank in order of greatest to least of S, A, B, C, D, or E in any, all, or none of these attributes. The higher the rank is, the greater the bonus it derives from that stat. This damage is added on to the base damage of the weapon as shown in 3, 4, and 5 on the screen to the right. So, as an example, either a Thief or a Priest could wield the Large Sword of Moonlight and perform attacks exactly the same way, but the Priest will expect do significantly higher damage because the weapon Stat Bonuses indicate a strong bonus from the Faith attribute where the Priest should excel.
Note: The Stat Bonus values for Strength and Dexterity generally affect the Physical attack power (item 3), and the Magic and Faith Stat Bonuses the intrinsic Magic attack power (item 4).
Weapons with high Stat Bonus ranks scale well with high stats. In the case of some weapons with high Stat Bonuses, they may actually be weaker than a weapon with high base damage attributes and low or no Stat Bonuses until your statistics reach a higher level. This makes them stronger weapons for high level characters, but possibly worse at lower levels.

From left to right: Bleeding, Poison, Plague, and Critical Strike. Bleed, Poison, and Plague all inflict damage over time. The number given for each respective weapon shows how much damage is done over 60 seconds. For example, '360 Bleed' of Magic Sword "Makoto", if victim bleeds (heart beat sound), will deplete 6 dmg/sec for 60 sec. Bleeding has a duration of 1 minute, Poison 3 minutes, and Plague 10 minutes. Poison and Plague also cut the effect of healing items, with Plague being the stronger of the two. Critical Strike deal a highly damaging blow to backstabs and ripostes.

The percentage of Physical/Magical damage absorbed when you block with Weapons/Shields. If you are holding a large weapon in the offhand and block, or two handing a weapon and block, these are the percentages of physical/magical damage that will be absorbed. Most weapons are greatly inferior to shields for this purpose. An exception is the Large Sword of Moonlight , which has a huge 80% Magic damage reduction.

The impact resistance of a weapon (or shield) while blocking. The higher this number, the stronger a hit you can take without being staggered or having your guard broken. Blocking an attack essentially trades the HP damage for Stamina, so the highest guard break reduction you can get is good not just for withstanding more hits, but also because it more efficiently dissipates the damage (less stamina depleted per damage absorbed)

Shows the required statistics to use this piece of equipment. From left to right the 4 symbols are for Strength, Dexterity, Magic, and Faith. You may be able to two hand it and get past a slightly low Strength stat score by pressing Triangle (this gives you effectively 1.5 x Strength). If you do not meet the requirements for weapons, the only penalty is reflected in a negative damage bonus as you will see reflected in the numbers shown above. However, this damage penalty is quite high, and you may find that being even 1 point short in an attribute results in such a severe penalty that almost any other weapon is a better choice. For shields, not meeting the requirement will result in a larger stamina impact when blocking, and the shield bash damage can be affected.
Note: Bows are always held in both hands when wielded, so you always get the 1.5x strength bonus, thus the actual requirements for using a bow are always lower than stated on the stats needed.

Shown as "Current/Max". The offensive or defensive power of a piece of equipment does not degrade slowly as it is worn down, but when durability hits 30% the item will break. A broken item is 30% less effective, both for attack power and damage reduction, and at 0% durability its effectiveness will be halved. Guard break reduction and special properties is unaffected by durability. Some pieces have exceptionally low or or high durability, so expect to pay often and a lot to repair your Silver Coronet or Blind and Katanas, but a Tower Shield can take a lot of abuse. All can be repaired by Blacksmith Boldwin in The Nexus or by Blacksmith Ed in Stonefang Tunnel, and any hand-held item can be repaired in the field using the "Ed's Grindstone" consumable item. Besides normal use and abuse, there are places your equipment can be degraded dramatically, such as the acid spew from the Giant Man Centipede in the Latria swamps. Get into the habit of visiting Blacksmith Boldwin whenever you return to The Nexus to get your gear back in peak shape.

Most important for characters with low Endurance scores, some weapons or pieces of gear are exceptionally heavy, and may impede your movement speed.