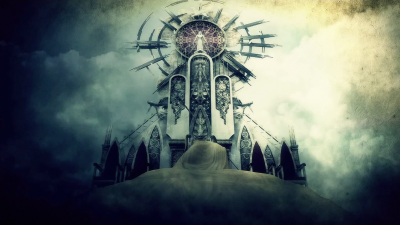 These are the stats of the single player NPC boss.

This is the equipment of the single player NPC boss.

The Old Monk fight is not so much a battle with a boss as it is a test of your PVP ability. Ideally, you will be fighting a player Black Phantom that, depending on whether or not they are wearing a cling ring, might have higher health than usual. If a player cannot be found, you will instead do battle with an NPC Black Phantom with notable dodging capability and armed with claws.

If you use a Blue Eye Stone, Red Eye Stone, or Black Eye Stone anywhere in the Tower of Latria, you may be summoned into another world as a Black Phantom. When summoned in this manner, you will be brought to the 3-3 Old Monk boss room and transformed into the Archdemon boss for the host player. You cannot leave this room and must wait for the host player to pass through the fog gate to do battle. Placing a Blue Eye Stone in an obscure location or using a Black Eye Stone before the 3-3 spiral staircase are common ways to force the Old Monk to summon you. Whatever the cause, the host's death will grant your body form back and, if you are lucky, the Monk's Head Collar. If you cause the host's death, your Character Tendency is reduced by one. If the host dies from anything else, you will receive the Monk's Head Collar with no Character Tendency change. Note that the host can also be invaded even if they're in Soul Form.

Notes on the Summoning Event[edit]

If you don't want to fight the other player or are focusing on gaining a Pure White Character Tendency , it is possible to use the White Eye Stone to return to your World. You will not lose a Character Tendency level, nor will you lose a Soul Level.

Attack Patterns The Phantom is very fast and is prone to rolling away from projectiles. Slow, arcing weapons like the Large Sword of Moonlight will often miss the enemy as it rolls inside your swing. Basic jabs. Very fast, but also very weak. The Phantom will roll forwards and sweep its Claw horizontally. Long recovery. Heavy uppercut. Starts with a long wind-up, ends with a stance that leaves it open for counters and backstabs. Be wary of attacking the Phantom with melee weapons more than twice in a row! It can and will Parry your attack and reward you with a fatal riposte. If you keep your distance to him, he will eventually equip his Insanity Catalyst and may cast Soul Ray. At 75% HP, it will summon two Homing Soul Arrow. The number of Soul Arrows will increase as it gets hurt further, to a maximum of five. If wounded and not harassed by the player for a period of time, it will eat a Moon Grass to heal itself.

When the Host begins heading up the tower's stairs, the Old Monk cutscene will be triggered at some point. If the Host has been invaded by another player, notification will appear immediately following the cutscene. If you prefer to play against another player instead of the AI boss, wait below the stairs until a fog gate appears between you and the Maneater archstone, indicating that Old Monk has summoned another player to be your opponent. If you have already summoned a Blue Phantom to help you, you won't know whether you're being invaded until after the cutscene.

Before stepping through the boss fog, always look to see if you can spot your opponent. If you can't see him, he is probably off to the side lining up a backstab or other sneak attack. It can be difficult to avoid, but rolling as you step through the fog will often allow you to clear the area before the backstab animation begins. If your character has the God's Wrath spell, and you think that your opponent is hiding near the doorway, you can stand at the fog gate and cast God's Wrath to preemptively strike the Black Phantom. If you hear your opponent getting knocked down, immediately charge through the fog and follow up with an attack. Keep in mind that the Black Phantom can do the same thing, and potentially kill you before you even enter the fog. Please see the PVP Tips section for more strategies.

If a human player does not get summoned by the Old Monk, then a computer-controlled Black Phantom will be present in his/her stead. This generic Black Phantom is equipped with the short ranged Claw weapons, which use basic melee strikes and can cause Bleeding. He wears the Gloom Armor set, with the exception of the Monk's Head Collar. The AI will simply rush at you, rolling if you use projectiles or start swinging your weapon recklessly. Just raise your shield, bait and attack. Whether the Black Phantom hits your shield or misses you, take a swipe (be wary however, as he has a very low but still present possibility of using a Parry and follow-up Riposte on you). Repeat as necessary. As he gets weaker, he'll start using Homing Soul Arrow. First with 2 arrows, but then up to 5 as he gets lower and lower in health. These things hurt, a lot. Keep your distance while moving sideways and they will miss, being fairly slow projectiles. He will also use healing grasses if you leave him alone long enough. So be somewhat aggressive in baiting his attacks whenever the Homing Soul Arrow spell isn't up, and then back away when it is up. This boss also has an Insanity Catalyst.

Equip the Dragon Bone Smasher, Meat Cleaver or possibly another extra large sword with two hands, and swing away as soon as you walk in. He will go flying and when he gets up run back for some more. Swing before he gets to you and watch him fly again. Just keep repeating the process until he dies. When he comes at you with the soul arrows around him if you hit him he will fly back and they will shoot from there making them easy to dodge. You will kill him in no time, works great.

Equip the Meat Cleaver and keep your Armor light enough to roll without a speed penalty. Roll towards the monk and immediately use the 2-hand the Meat Cleaver R2 attack which will slam the Weapon into the ground.

Staying out of his melee range while not using the rolling attack should keep you safe. When he casts Homing Soul Arrow - simply roll around him in a circle motion, but make sure to keep enough stamina. Rinse and Repeat until he is dead - no shield required.

If one player uses God's Wrath to knock over the Black Phantom, it gives the other a chance to get with in range to enact the knock down. If both players keep this up the poor Black Phantom will not have a chance.

This works well when fighting the AI version of Old Monk. Constantly sidestep with shield raised and you should suffer very little damage from Old Monk's Soul Arrows as they miss if you are constantly strafing. The actual casting of Homing Soul Arrow often causes him to roll and evade but when the spell actually fires at him he does nothing and takes the full 5 hits.

Wear the Graverobber's Ring and equip the Dragon Bone Smasher before entering the Fog. Step through and hit Old Monk to send him flying. Run to one end of the room and stop. He will lose you and stand still. Walk (don't run!) closer until you can target lock him. Now just cast Poison Cloud a few times to kill him.

Firestorm does high amount of damage if both players are mages, buff up with Second Chance or Warding and rush the phantom. If both get the cast up, chances are that the 5-10k worth of damage at close range. This will kill the Black Phantom in one hit.

You can easily kill him by using Firestorm , however, the spells gets cancelled if you take any damage while casting it, and since Old Monk will be constantly running after you and doing quick attacks, it might be hard to get a full cast of Firestorm on him, plus the fact that the spell is somewhat unreliable, as you might get unlucky where the pillars will appear. Fear not, as it can be done alone, and quite easily in fact! Before anything, you must know his attacks, especially his uppercut, because after he does that, he will take some time to recover from it, so one way to ill him is to bait by getting near him and rolling away, and he might use that attack. After you damage him enough, he'll use Homing Soul Arrow , a rather nasty spell if you get hit by all the arrows, but it is possible to dodge it, and the way to do it is by having some space between you and Old Monk, and when the arrows fly towards you, just move away, you don't even need to roll. In my opinion however, the best time to use Firestorm is to use it *before* he gets into melee range, so make sure you bait an attack roll away from him far enough, and after that, right before he can punch you, cast the spell. Again, remember that the spell is not reliable, you cannot force a pillar to spawn where you want it to, but generally, you'll hit him.

Strange enough, at the start of the level from the big square shape room and the bottom of the stairs you will be able to summon a Blue Phantom. When fighting the offline NPC it will focus all of its attention on killing the person in body form leaving it open to back stabs and devastating attacks from the Blue Phantom. A side note if the phantom is dealing high enough damage the NPC will switch targets to the phantom allowing a loop of damage from the free fighter.

Keep in mind that the NPC will have more health then normal due to the fact there is more than one player present, but this won't be a problem for two or three people.