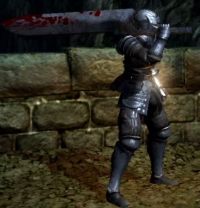 A large cleaver forged from the soul of the Demon "Adjudicator." It is the Adjudicator 's own weapon, and transforms sinners into delicious-looking cuts of meat

It also steals a small amount of HP from its target when attacking, reflecting the original Soul's avaricious nature.

This weapon is created at Blacksmith Ed using a Swollen Demon's Soul.

Ed must first be supplied with a Red Hot Demon's Soul before he will allow transformation of items into Unique Weapons. It can be created from any of the following:

1. When two handing this weapon, only 18 Strength is required