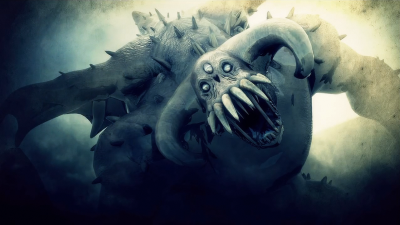 Players first meet the Vanguard at the end of the Tutorial stage.

It will rear its ugly face again early into the Shrine of Storms.

Here you can choose to run past or, pay him his just desserts and reap the rewards.

Make sure you pick off the Storm Beast and Silver Skeleton archers before engaging the Vanguard head to head. The last thing you want is an arrow or gigantic thorn in the back while you are trying to dodge the Vanguards attack. Also, if happen to kill Vanguard and die right after by getting hit by either one you will not get your reward for killing him, and he will not respawn. The general strategy is to get behind him, wait for the butt stomp to complete, then rush in for a few attacks. He will turn around during this, so you'll need to make your way behind him again.

This sounds easy, however he refuses to move from the bottleneck he is in, and moving around while locked on to him can be annoyingly difficult. Plus, one hit from the axe and you'll likely be dead, even if it doesn't kill you outright he tends to hit you with followup attack. Rinse and repeat for as long as it takes. He's got a ton of life and only yields about 1000 souls.

Simply attack the Vanguard with a ranged attack of your choice. If you're far enough away, Vanguard won't move or attack; not very challenging, but it gets the job done! In the broken out wall beneath the annoying archer where the composite long bow is, you can stand and fire arrows at him. He won't move, the Storm Beast won't attack you, and you deal high damage, since you're pretty much right next to him.

Continue through the level normally until you reach the underground passage exiting through rubble leading behind the Vanguard. Then just kill the two Storm Beasts that fly around this area so they don't shoot at you. Then simply shoot Spells1 or Arrows at the Vanguard, he will notice you, but if you keep the fallen rubble between you and it, he will simply roar and occasionally swing his weapon without hitting you.

This is the easiest and not to mention safest way to kill the Vanguard in 4-1 You must have God's Wrath , several Fresh Spice or Old Spice and a Talisman of Beasts or Talisman of God.

Move through 4-1 until you get to the gateway with the two skeleton archers. Run left through the corridor, up the stairs and proceed down the broken steps to the left, towards the other archer tower. Ignore the Silver Skeleton and two archers, to the right completely. Kill the two Skeletons in the room below and move up the stairs until you come face to face with the Skeleton archer. Kill him and move to the corner that would place you right above the Vanguard. Now the easy part, cast God's Wrath until he's dead. It is impossible for him and the Storm Beasts to hit you and it will probably take about six or more God's Wrath until he's dead, depending on which build you chose. Well done! You've just beat the Vanguard!

Exit the underground passage behind Vanguard, and go up the stairs as usual, but once you have sight of the Silver Skeleton , climb the ladder to your left. At the top, go to the side directly above the Dual-Katana Skeleton. Make sure you have less than half equip burden. At the wall facing the roof like area, run and roll at the edge. If it worked, you should be behind Vanguard on the previously un-reachable roof. You are now outside his range, but close enough to target and shoot him with magic! (Just make sure you kill the mantas. Dont want your happiest moment ruined by a giant thorn in your back!)

You can use the secret door in the gate-like structure to move through the passages (near where Graverobber Blige is being held captive) to emerge behind him. This makes meleeing and ranging even easier, as he cannot get past the small pit that the shortcut emerges out into and therefore cannot reach you. Just be careful of attacks from the two circling Storm Beast. If you have the patience and poison cloud, you can stand behind him at the left corner of the pit and cast on him. It won't draw his attention, but does take several casts.

Royalty is possibly the easiest character to take this tutorial boss down with. Simply circle him, roll when needed and hit him with Soul Arrow. Your Fragrant Ring will support you aptly with Mana regeneration.

In the tutorial, Vanguard is very much like it is in 4-1, except a ranged take down is impossible and it can kill you in one hit, it also has less HP. Although it is possible to survive one hit even with light armor (tested with a recently started Wanderer) the follow-up will more than likely kill you. Because it is possible to kill even a Knight in one solid hit, the first thing you should do is remove your character's armor if your mobility is affected. The first attack is probably the most difficult to survive, it may hit you and take you out as you are trying to rush behind it. After evading the first blow, begin moving around the walls of the room clockwise, so that Vanguard will rotate clockwise as well. Keep it away from the walls or else its stomping move will be unavoidable. After that, you must simply run/roll under its right arm and behind it and stay there. Hit it in the back as much as you can and stay centered, avoiding all its weapon attacks. When its feet leave the ground, roll away twice, or move backwards [[a bit. After killing Vanguard you get 4 Full Moon Grass , 3 Renowned Soldier 's Souls, 3 Shard of Hardstone, and 3 Shard of Sharpstone in addition to a Grey Demon's Soul and a cutscene of you getting a beatdown.