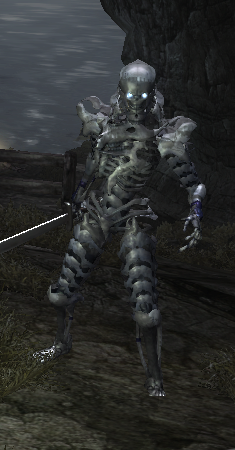 These guys run fast and dodge by rolling around. They can also hurt you while rolling, which stuns you momentarily. If you back off they will roll after you, and they will not give you time to heal. They are susceptible to blunt attacks and largely resistant to piercing. It's a good idea to wear the Thief's Ring for this stage to avoid being attacked by two at once.

A good reliable technique for a melee character is to use a Morning Star or a Blessed Mace and shield. Keep blocking until they attack then get a single swipe in (or two if you're behind). Keep that shield up if they roll at you. Every so often they will lean back with their swords for a massive swipe (a big guard breaker attack). When they start this, you can attack quickly to interrupt them if you have a fast weapon, or back out of range rather than take the hit on your shield (they still have to recover from it, and if you back off you keep your stamina bar up). You can freely attack them before they recover. Occasionally they'll pull back for a stab move, this is easily sidestepped. Try to get behind them for a critical back stab. Because they are susceptible to blunt weapons, and some blunt weapons do extra damage during critical strikes, you can kill them in one blow this way. Since they are fast moving, the stun/interrupt effect from fire weapons can buy you some safe time, and if you have enough stamina you can stunlock them with successive hits until they are dead. An upgraded Dragon Blunt weapon (Mace or Morning Star) is a good choice for most of the level.

In absence of blunt weapons or for dexterity based characters in general, swords with a large swipe radius, like an Uchigatana , also work very well, because they still hit when the skeleton starts to evasively roll sideways.

A very easy way to kill them is to hold L1 and block while they roll into you, when they stop rolling 90% of the time they will immediately pull back for a normal attack. Simply hit parry and then riposte. If they do the slow charged up overhand attack or stab, you should have time to see this coming and you can hop back or interrupt with an attack. Another effective shield tactic is to two hand any parry type shield and use R2 to charge into their roll. Follow up with regular shield bashes until it rolls away, allowing a chance to regen stamina. Rinse and repeat as necessary. To avoid the roll attack altogether, watch them while they are rolling towards you and position yourself so that their last roll will end shortly in front of you. They will then always stand up and attack normally.

The archers aren't too bad to deal with, but fire magical arrows. Unless your shield has been enhanced against magic, you'll want to sidestep or roll under these arrows rather than take the hits against your shield.

For Magic Users, Soul Ray does good amount of damage to them (even in New game+) but they are immune to death cloud.