Biorr, of the Twin Fangs 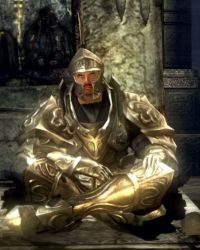 Biorr of the Twin Fangs is the eldest member of the King’s elite duo known as the Twin Fangs. When the second-half, Vallarfax, fled the Kingdom and escaped the fog to warn the rest of the world of Boletaria’s plight, Biorr stayed behind to defend the honor of the True King Allant. He soon found himself at a great disadvantage against the Kingdom’s new demonic inhabitants. He possesses great wisdom and knowledge about Boletaria and an undying devotion to the real King, which he valiantly shows while aiding the player in battle.

He is very dangerous to fight head on because of his high stamina, large health, heavy armor, and high damage. You can kite normally as with any NPC but this will take a while to kill.

Easy way to kill anyone in the Nexus:[edit]

Stand far away and shoot an arrow just so the target stands up. Run up to the target and roll at and away from their starting position. If you manage to push them far enough away they will begin to walk back to their position. Dual wield your strongest weapon and backstab them while they are walking. You can get about 3 backstabs before they start being agro. Rinse and repeat.

If you have Poison Cloud , you can simply cast it on him, then wait. Rinse and repeat and he will die, with no effort required. (You can use this tactic on any of the Nexus NPCs and on Old King Doran)

Drops the following if killed:

1. After killing blue dragon, exhausting dialogue and beat False Allant, he leaves forever. If you want to wait untill the very end game to do Mephistopheles Quest, you should aggro him after exhausing his last dialogue. He'll remain in 1-4 stairs undefinitely.