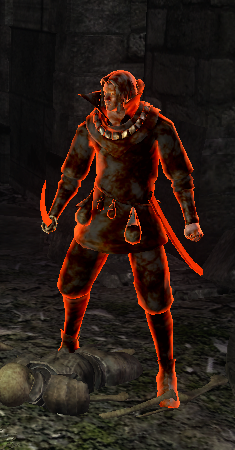 During Pure White World Tendency , Satsuki will not attack you if you are not carrying the Magic Sword "Makoto" when you talk to him. It doesn't matter whether you've already obtained the sword during the current game, or whether he's already spoken to you about it. After obtaining the Magic Sword "Makoto" in 4-2, if you let Stockpile Thomas keep it for you, Satsuki won't realize that the sword has been found. In the "Official Guide" included with the Deluxe Edition of the North American version, he is referred to as "Master Satsuki," but this reference does not appear in the N.A. game itself.

Much easier to defeat than his Black Phantom counterpart, Satsuki in body form will not attack the player until the player talks to Satsuki and settles with a much lower HP. This will allow you prepare any pre-emptive buffs or simply ignore him altogether. If you do choose to engage Satsuki, be aware that he is agile and quickly attacks with a katana which also leaves him more susceptible to stagger opportunities when his attacks are blocked with a shield, use this to your advantage.

This method is most effective when using a weapon with a solid stunlock capability and a pre-emptive buff applied. Upon turning hostile, Satsuki's most common first move is to roll away from the player which naturally leaves him cornered. Using your weapon of choice, keep attacking Satsuki and push if necessary to keep him trapped in the corner as you chip away at his health. If done correctly, Satsuki will remain in a constant stun phase and will not be able to counter the player.

Satsuki is not initially hostile upon seeing the player-he only turns hostile after he asks about the Makoto Sword. For an easy win, simply enhance your magic power to its maximum and cast Firestorm next to him. The area around him will cause him to remain in the centre of the Firestorm which will quickly kill him, this shouldn't take more than one cast.

Satsuki as a Black Phantom will attack the player upon entering the level, leaving little opportunity to preemptively buff. It is possible to cast Second Chance/Warding and a weapon buff if you're quick enough.

Additionally, it is a good idea to stay near the start of the level or the Silver Skeleton will join the party. This results in a difficult situation if the Skeleton is not quickly defeated.

Satsuki has the nasty habit of evading numerous attacks and fully healing with a herb. As his HP becomes lower (around 30% or below), it is advisable to have enough Stamina to finish him.

Turtle with Large Axe/Hammer Immediately after entering 4-1, cast either Cursed Weapon or Light Weapon and Second Chance , if you have enough time. Satsuki's katana strikes are very quick which can make it difficult to mount an offensive, however his katana is not very effective at breaking a shield guard and his attacks will often repel leaving him briefly staggered.

Simply retreat after he begins to advance and block his first strike. Position yourself so that your one handed R1 swing will cause him to be knocked back towards the Archstone. After knocking him down, quickly approach him while two handing your weapon and attack him as soon as he is back on his feet. The third R1 swing will knock him back, allowing you to repeat this strategy, or attempt a backstab. You should have no interruptions from the Skeleton or suffer a hit from Satsuki.

Enter 4-1 with Graverobber's Ring equipped. Edge forward until the Skeleton pops up and snipe him, then retreat and finish him off. Approach/shoot Satsuki until he charges and throw Soul Remains at him, sneak up and back stab if possible. Otherwise just get in a good 2-handed attack. From here you can pound him with more two handed attacks without having to wait till he gets up and these will reset the 'getting back to his feet' animation.

Always keep some Stamina in the event you need to block. If hit while blocking it will take about half of your life. Distract with Soul Remains if you need to heal. Circling works well to dodge his attack. Don't stop until his strike is finished or you will get stabbed, smash him with R2. Tested repeatedly using Meat Cleaver , no shield, Cling Ring.

Using a reflecting shield and any dagger keep circling him counterclockwise (run, don't roll). Raise your shield when he attacks. After being blocked or one of his hard, slow attacks, you should be able to backstab him. Now while he's standing up keep circling counterclockwise and just backstab him again. If the backstab animation doesn't come, don't keep attacking but reposition yourself slightly before the next strike. You can either repeat this until he dies, but most likely a wall will get in the way. Then just start again as before, but be ready to charge attack him when he tries to heal.

Simply unequip all armor and equip the dragon bone smasher and two hand it. This can be a little tricky as the first hit may take a couple tries to land. R1 him as he runs at you, or dodge his first attack and do an R1 attack. This will knock him down and then you can simply chain attack him right as hes about to get up until he dies.

If you bring Soul Remains , this battle will go a lot easier. Equip the Graverobber's Ring and Thief's Ring before entering the level so that Satsuki will not rush you. Move just far enough to see the Skeleton stand up. From here, move back and target the Skeleton with a ranged bow attack. Once hit, he will come at you. Dispatch the Skeleton however you like. As long as you are far enough back, Satsuki will not charge you. Once the Skeleton is gone, unequip the Thief's Ring and equip the Ring of Magical Sharpness. Have the following items hot-keyed for your square button:

Move close enough where Satsuki starts to charge you. Throw some Soul Remains at him. He will start chopping at the air and ignore you. Make sure he is close enough to target with R3 and throw about 3-4 fireballs. He will start moving toward you, but throw another Soul Remains. Again, he will chop the air and ignore you - while he is doing this, eat some Old Spice to fully recharge your MP. Repeat this process until he dies. As long as you keep throwing the Soul Remains, it should distract him from using grass to heal himself.

Returning from Adjudicator 's Archstone, equip Thief's Ring and kill the Skeleton with a bow, equip Graverobber's Ring, walk near to his back and Soulsuck him.

Approach him from 4-1 archstone, with Thief's Ring equipped. As soon as you spawn, cast Second Chance, take a few steps froward, wait till he spots you, and after a little while cast Soulsucker.

This method might take a little while to finally succeed, but it will result in instantly killing him. The reason you need Second Chance is that he will hit you when you soul suck him (this may not be needed on later playthroughs, with a lot more Vit on your hand, but on Ng+ it's necessary).

You will need around 55 magic. Get your health to 30%, equip a Morion Blade , Clever Rat's Ring , Ring of Magical Sharpness, and Monk's Head Collar. Cast Homing Soul Arrow and sprint at Satsuki when he starts running at you. The Soul Arrows should fire and do around 3000 damage, which should kill him instantly. Tested in NG++ with a Magic of 56.

Since Satsuki spots you with a certain facility if you face him directly, you will need to return from Adjudicator's Archstone 4-2 to kill him without being noticed. Once you make your way back to Satsuki's spot, equip Thief's Ring and kill the Skeleton with a bow, equip Graverobber's Ring, walk carefully to approach him from behind and cast Poison Cloud. Two poison clouds should be enough to kill him. Tip: The spot right after a boulder will be close enough for the poison cloud to hit him.

A similar approach is to start at the 4-1 archstone with Graverobber's Ring, attract the skeleton and kill it, then engage Satsuki. Get him away from his starting point, then throw Soul Remains and while he is distracted run through the arch and immediately turn right. Satsuki will lose track of you, return to his starting point, and you can then move out slightly and lock on and cast Poison Cloud and/or Death Cloud.

Note: if you want to raise your Character Tendency then you must finish him off with combat (physical or magic); killing him with poison will not affect your character tendency.

When approached (PWWT)
Hey, you over there!
you seem to have your head about you.
Come here. I have a proposal for you.
Do not be afraid. You have much to gain.
First encounter
I am Satsuki, I seek a keepsake of my father.
Have you seen the sword inscribed "Makoto"?
I will offer you Demon souls if you can help me find it.
The Makoto chooses its owner, but he who harbors self-delusions should at once be warned.
The Makoto is no sword for the faint of heart
Second encounter (with Makoto)
Ah, you have found the Makoto, have you?
Bless your good fortune. And, well, your good work.
Now, just hand the Makoto over to me. ( yes / no )

What on earth is wrong with you?
How dare you waste my precious time!?
Do you not want Demon souls? ( yes / no )

Fine, have it your way. A duel will settle this.

(same response as below)
Yes

Yes, yes, this is she.
This luster… It's finally mine! Keh heh heh heh.
Except… could this sword really be as deadly as the rumors claim?
There is only one way to find out!
Second encounter (wielding Makoto)
Hmm, expecting the Makoto to warm up to you?
Nonsense. Your very touch soils her impeccable hilt.
May you plunge to the depths of hell for your unsavory insolence!
If attacked
How dare you? You shall pay in blood!
If player is killed (Satsuki wielding Makoto)
The Makoto lives up to its name.
Its blade shines with an unworldly perfection.