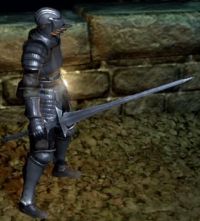 A white iron straight sword born from the soul of the demon Maiden Astraea.

The sword of true nobility, endowed with the essential power humans are born with, which increases its attack power.

1. when two handing the weapon, only 12 Strength is required