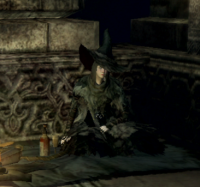 Yuria practices a dark form of Soul Arts, to the great disapproval of Saint Urbain and his followers. She was imprisoned by Executioner Miralda under the watchful eye of one of King Allant's Fat Officials, but if rescued by the player, becomes one of the two advanced Magic teachers, along with Sage Freke.

Dialogue from her and Biorr suggest that she has been subject to torture from the Fat Ministers. Inside the tower she is held captive there are two corpses holding the Ring of Magical Nature and the Ring of the Accursed. The item description of both these rings implies those corpses having been witches. Just like Stockpile Thomas ' wife and daughter they have fallen victim to the Fat Ministers. (In 1-1 you find two hung corpses, one holding the Jade Hair Ornament and the other the old ragged robes set. Due to Thomas' dialogue when you give him the ornament it becomes clear that these corpses very likely were his wife and daughter. Again the other corpse holding the same armor set as Yuria suggests that his wife was a witch and that was probably the main reason for their execution.

Despite her use of dark Magic , Yuria is a kind, if timid woman, though she has demonstrated a remarkable temper, the quickest to become hostile out of all the NPCs. After the Slayer of Demons rescue Yuria she becomes infatuated with the protagonist, regardless of gender, going as far telling that she owes her life to the hero. Sage Freke once stated that Yuria's Magic is weaker than his because it stems from emotion, but no evidence exists that this is the case.

Note: You keep the Official's Cap in New Game+ but you have to find the Iron Ring of Keys and Bloody Iron Key again.

Note: Rescuing Biorr is not a necessary trigger for Bloody Iron Key to work. Yuria can be rescued without ever opening Biorr's cell.

First encounter (Boletarian Palace 1-3)
Heavens, you… You… came to… save me?
Thank you. No, I’m fine. With a little rest, I can soon walk.
You go on ahead. I do not wish to be a dead weight.
First encounter (Boletarian Palace 1-3, wearing Official’s Cap)
What do you want with me? Have you brutes no mercy?
Do as you wish. There are no secrets here; only a tired, emaciated frame.
Nexus, greeting after rescue
Hello again. You saved me from great agony.
I am sorry, for I cannot offer proper thanks.
If you wish, however, I can teach you magic in trade for Demon souls.
But my witchcraft is of a dark nature, and arouses suspicions.
Why not try the magic of great Sage Freke?
Once, I lusted after the power offered by Demon souls.
I ventured through the fissure into Boletaria, but became trapped in the Nexus.
Then, the King's executioner, Miralda, chained me up inside that tower.
My thirst for Demon souls is no more.
On the contrary, I find such power dangerous.
Nexus, Yurt entering the nexus after you rescue him
Do you know Yurt, the silent chief?
He dons pitch black armour, and a helmet with two sharp spikes.
Yurts presence in Boletaria has resulted in the death of many a great hero.
Whatever his motives may be, he is a grave danger to us all.
Do watch out for him. I cannot bear to think of harm coming to you.
Nexus
Freke wields a different kind of magic from my witchcraft.
Freke's magic stems from an understanding of the essence of the Demon soul,
while my witchcraft merely channels its energy. If the Demon is cursed, so shall be the witchcraft.
Freke's power comes from human potential, while mine is a dark, dependent art.
Nexus, After End Of The Game Is Unlocked(Defeat All Archdemons)
I feel great misgivings about Freke.
I was branded a witch at a very young age, and since then, I have been persecuted as a threat to human society.
Although I never had ill-intentions, this black craft of mine is intrinsically evil.
If there is a God, he gave us souls to do good, not to practice witchcraft.
My accusers detested my dark arts for good reason, for the path I have taken is tainted.
This has been one of my realizations since coming to Boletaria.
But I am afraid that Freke, too, has ventured down the wrong path. He has become obsessed with the dark arts.
Greeting
Are you certain you wish to learn witchcraft?
It would honour me to assist one such as you, but…
Are you sure?
Open menu after learning/ remembering a spell
Are you here for more Witchcraft? Very well. I shall help you however I can.
Exit menu before learning/remembering a spell
I owe my life to you.
If you are ever in need of Witchcraft, speak to me.
It is a dark art, but it is all that I can offer.
Exit menu after learning/remembering a spell
Thank you. Speak to me again whenever you are in need.
Thank you. I hope that my witchcraft may be of some help.
Walk away without exiting menu
Oh…
Where are you going?
When attacked
Wh-why?