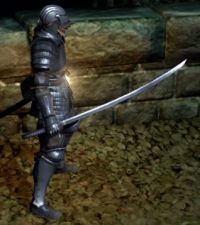 A keen, thinly bladed katana forged in a distant country.

The long black blade is heavier than it looks. It has very high attack power and causes enemies to bleed, but the fragile blade is easily nicked.