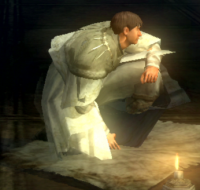 Saint Urbain is a pilgrim of God and a devout believer in Miracles. He puts his faith in his Lord that prayer and worship will rid Boletaria of the Demons. He has many followers, few of which accompany him in the Nexus. 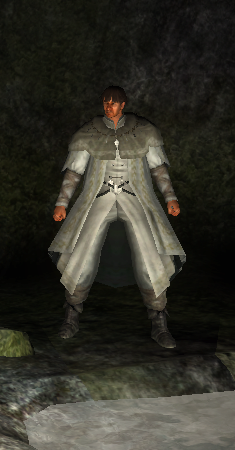 The shrine Urbain is praying to houses a Talisman of God, although you cannot take it. This is how Urbain probably "speaks to God", through the Talisman of God itself. It makes sense since it is supposedly a channel through which God works.

Urbain may disappear from the hole in 4-2 as part of what seems to be a larger glitch involving Patches. He won't re-appear until the next game cycle.

First encounter (pit in 4-2)
Heavens, did you fall for that little devil's trap?
Well, I did the same. He fooled me, and now I am stuck here.
The reverberations seem to suggest that we are connected to the outside.
But dark, fearsome souls stand between us and freedom.
But have no fear, God will cleanse us of evil.
Pray with me.
Umbasa.
In 4-2, after defeating BP guardian
Oh, it's you.
Did you cleanse the world of another dark soul today?
God has chosen you, and for that we are thankful.
Umbasa.
Nexus after rescue
Thanks to you, I was able to seek refuge in this Nexus.
Now I stay here and pray, along with my disciples, for the heroes facing the Demons.
If you wish for benevolent protection in your fight against the demons, then bring me Demon Souls.
I will cleanse them, and perform a miracle with their power.
If you truly are a disciple, then you must have a talisman in God's image.
Heavenly miracles occur in Boletaria through the talismans.
God has granted this accursed land with a special power.
It is God's way of telling us we must stand up to the Demons.
After the dark arts spread across the land, holy miracles were witnessed once again.
The will of God is clear.
We must defeat the Demons, annul the curse of Boletaria, and purge the evil magicians who manipulate those accursed souls.
As you know, souls are a source of evil power emanating from the Demons.
King Allant was overcome by a lust for such power, and has placed Boletaria in her present predicament.
Old Freke and the candle maiden are no exception…
Nexus after ?
Ah, Astraea of the Valley of Defilement?
I am not sure, but Saint Astraea of the West was accompanied by the knight Garl Vinland.
She would never turn to evil with that upstanding knight to guide her.
Surely it is mere slander. Sadly, the weak are prone to such backstabbing.
Nexus after 5-1
Bito the Moonlight Knight, Lizaia of Istarel, and Selen Vinland.
Many honourable knights have ventured into Boletaria in search of the Valley of Defilement.
The vicious rumours about Astraea offend our most basic sense of respect for God's name.
However, none of these great knights has made it back.
Could it be that the wretched valley is so infested with grime that even our Lord's voice does not resonate there?
Or… perhaps it is the fate of those left behind by God…
After all archdemons are dead (seal is opened)
From where does that howl come?!
That is no Demon. It sounds more like a poor hungry child.
Do you have any idea what it might be?
Something about it sets me at great unease.
May God watch over us. Bless us, and all of Boletaria.
Umbasa
Greeting
Oh, is that you again?
Do you have further gifts to offer?
Leaving without learning or memorizing a miracle
Yes, I see.
I certainly cannot force you to do anything.
But you must remember this.
A Demon's Soul is a source of evil power.
Leaving after learning a miracle
God bless this brave warrior.
Umbasa.
Walking away without "Leave"
Where are you going?
When attacked
What are you doing? Have the souls driven you mad?
Stop it.
You will anger the heavens.