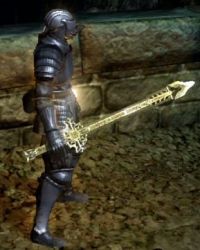 It's physical attack power is close to non-existant, but is strongly magically enhanced and also protects its wielder from magical attacks.

It is the weapon of the legendary hero, with it's paired rune shield.

1. When two handing this weapon, only 7 Strength is required