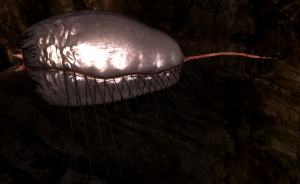 Each world has a Primeval Demon, which will appear in specific locations slightly before Black World Tendency (see below). This means they appear while a world is slightly whiter than Pure Black. They will also be there when PBWT has been achieved. Primeval Demons are for the most part harmless but if the player stands in front of the demon's mouth, it will bite.

Killing them will raise the respective World's Tendency by +3 and there is a high chance of dropping a Colorless Demon's Soul. In the event that the Primeval Demon does not drop a Colorless Demon's Soul when killed, should the game not "save itself", the player may try to immediately load his/her file and kill it again, repeating until one is obtained. This method is very uncertain, however, as the game chooses when to auto-save, making it "wishful thinking" at best. If a Colorless Demon's Soul doesn't drop, try the loading game method; just don't depend on it working.