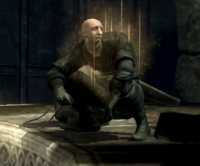 Patches is a scoundrel who enjoys setting traps for unsuspecting travelers, often using their greed against them to lure them to their demise and loot their corpse. If players resist the temptation to kill Patches in revenge for trapping them, he will return to the Nexus where he is a useful merchant.

Unlockeable to the Nexus after you encounter him in an Archstone.

If you obtain Pure Black World Tendency in 4-2 before encountering Patches, he will not reappear for that play through.

Completing World 2-1 and then World 4-1 without encountering Patches in World 2-2 first may cause him to disappear from the game until New Game +. This is not linked to the Black World Tendency Events above, although it may be a White World Tendency Events (as it is noted to have occurred during the October 2010 White World Tendency Events). However, it may also be a glitch, because the disappearances of Graverobber Blige and Saint Urbain from their positions in World 4-2, as well as the continuous re-spawning of the Black Phantom in Saint Urbain's pit in 4-2, may also be related to this situation.

Nexus, after encountering him in any world
Well, I remember you.
I'm glad I found you. I've found some really nice trinkets.
Well, we've been long acquainted, so I'm willing to part with them at a special price, but only if you buy today!
Nothing here is stolen, I swear.
I no longer partake in the whole corpse-robbing thing.
Yeah… No, I'm completely free from my vice.
My old Mother would be proud indeed!
Aren't you proud of me too?
I've not seen YOU of late.
Heh heh heh, have I got some stuff for you!
No, no, don't mention it! It's the least I can do for a dear friend!
But do pay for them.
Nexus, after rescuing Urbain
You see that priest and his disciples over there?
They still don't trust me after that little incident behind the altar.
Shouldn't they believe in forgiving and forgetting and all that?
Well, I have news for them. Praying has not put food in my mouth, nor anyone else's.
Nexus, after beating 2 Archdemons
I have bad news.
There's a rumour that the silent chief Yurt has infiltrated Boletaria.
Yurt's a mercenary; he'd kill his own kin for the right price.
Now, I'm not a saint, but compared to Yurt I'm as saintly as they come.
So I implore you to stay away from Yurt, the assassin in black.
Nexus, after beating 3 Archdemons
No no, don't mention it, it's the least I can do for a dear friend. But do pay for them!
Did you ever visit the Valley of Defilement?
The bog there is filled with the corpses of honourable knights too foolish to stay out of harm's way.
You may have heard of some of them.
Vito the Moonlight Knight, Risaia of Istarel, and many, many more.
I reckon they left behind some fine armour and weapons.
Why not have a visit… see what you can find?
Leaving without shopping
Well, do as you please, but you may yet regret refusing my offer.
Well, do as you please, but don't come a-crying when it works not.
Fine, fine, fine, I cannot make you.
Though I know you'll come back soon.
Leaving while talking
Hey, where are you off to?
When attacked
You slimy little wretch! What did I ever do to you?

Voiced by: Will Vanderpuye