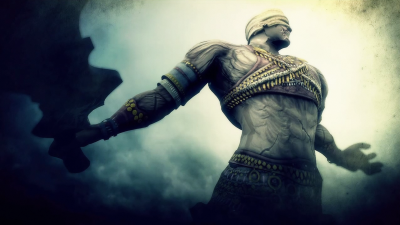 Old Hero is weak to both magic and fire but is also very easy to poison as outlined below.

First of all and most importantly, take your time. This boss is blind, he has no eyes. He only senses you and moves in the direction he's being attacked from. Otherwise he'll just wander around and attack random spots if you aren't attacking him, use this to your advantage and don't rush through the fight. With that said, a hit-and-run style tactic works fairly well, landing some hits and keeping your distance and evading attacks. A bum-rush can work if you're strong enough but it is an inelegant approach to tackling this boss.

If fighting in Soul form, you make no noise from running sprinting or rolling. If fighting in Body form, by equipping the Thief's Ring, you can greatly reduce your presence. Keep in mind heavy equip weight can hurt your sneaking skills. With the thief ring on, by moving slowly (i.e. walking), the boss cannot see you and will wander, striking random spots. When you see him raising his sword to strike a spot (which won't be you if you're sneaking) run up and get in several hits before rolling away and repeating the tactic. It may take a while doing it this way, but rushing him and trying to defeat him with ease simply will not work. He does heavy damage, and most likely will be able to deplete half of your health bar with one swing. If you have the Warding spell, it is very useful in this fight. For the most part you should stick to avoiding his attacks and sneaking by him, attacking only when you see the opportunity. Also be careful when he sticks his sword in the ground. It might look like he's kneeling, but he really is doing an AoE blast (basically a miniature version of the False King's ability).

Homing Soul Arrow does an amazing job of defeating the Old Hero. Get behind him (never sprint), cast your 5 orbs, once they release they take out about 1/5 of his health. Then start dodging his attack by rolling. Make sure you're not wearing heavy armor. Then go half way up the stairs in the back and replenish your magic and health if needed. Rinse & Repeat.

Firestorm can make this one of the easiest bosses in the game. Equip plenty of Spice and moon grass. You can easily sneak up behind him as he searches for you. Do not try and use Firestorm in front of him as he'll randomly attack the empty space in front of him from time to time. If you need time to heal and use spice, there's a pile of debris at the opposite end of the room from where you entered if you get behind it, you should be safe from most of his attacks. Don't get too attached to this spot as his leaping attack will still get you.

The closer you get to him the more of a chance you'll have of hitting him with the full Firestorm. He will roar after you Firestorm him so don't do it for a second time unless you want to get stabbed in the face with his leaping attack. Let him calm down and try to put as much space between him and you, but still be on the look out to dodge any of his attacks. If you do all of these the fight should end quite quickly, especially if you're on your first play through since Firestorm will take down most of his life. If your on NG+ it might take between 3 to 4 Firestorms to kill him.

Equip the Thief's Ring and chill out behind a pillar. When he walks away from you, fire a single arrow or spell. (Homing Soul Arrow works well and does a good bit of damage. He will roar in pain then resume walking. When the roar ends, fire another. Rinse and repeat until he dies. Just make sure you are hiding behind the pillar when he walks towards you, otherwise you risk getting hit with a sword wave, or side-to-side combination. If you fire the projectiles too quickly (i.e. while he's still in his roar animation), he'll notice your location and release a jumping sword wave directly towards you! If you are in Soul Form, you will likely die. The back-left corner works extremely well, as he will never come over to you unless otherwise provoked.

Staying behind the altar is a safer alternative still: He'll never attack the altar unless you give away your location, you don't have to worry about keeping a pillar between him and you, and you can fire arrows at him no matter which direction he's walking. The downside is that he's harder to hit: Learn to anticipate where he's going to be after a random-direction attack.

If you manage to provoke him into a jumping attack, the altar won't protect you from that vertical chop. But, you have more time to react as you see him sprinting towards you, letting you dodge.

If you're behind the altar, and you provoke him enough that he runs over and hits you with a jumping attack, don't panic! If you survive the attack, simply stand still and do nothing as you get up. Despite the fact that he hit you, he'll return to his regular roaming grounds between the pillars, letting you heal in peace.

He is weak to Poison. Poke him with poisoned weaponry, or use Poison Cloud, or throw some Kunai. There are 11 free Kunai in the first Reaper room of 4-2, to your left on the upper walkway as you enter. Demon's Prank is absolutely ideal for this boss.

The majority of his attacks in melee; once you've struck him the first time, tend to be downward slashes. It is sometimes easiest to run in circles around him and attack when he attacks as he can't really hit you. After a few attacks, he will start rushing all over with sweeping attacks and generally you can avoid it with a roll or two and then run to the other end and repeat.

Your footsteps don't make noise while in soul form, so he cannot hear you while you're in soul form even when rolling or sprinting, negating the need to use the Thief's Ring.