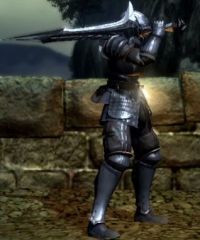 Legacy of the Old Boletaria Kings. The shadow this sword casts is of both the Soulbrandt and the Demonbrandt.

Little is known of its origin even in Boletarian Royal Family lore, but it is said to have been left in the world along with the Old One for malicious purposes.

This weapon can not be upgraded

This weapon can not be enchanted