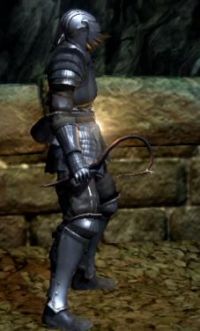 This weapon was forged from the Soul of the Demon "Maneater." It stabs its target, hooks into the flesh, and slowly grinds away at the Soul.

Could it symbolize the relationship between the host and snake within the Maneater?

This weapon will award the player +20 souls every time they hit an opponent, however the damage is a joke, so just make it for the valuable weapons trophy and toss it in storage. It is easier, more rewarding, and faster to farm souls from alternative methods listed on the wiki. As a side note, it can be somewhat useful if you die and need to repair your weapons before going back to your bloodstain, since it can steal souls from the Maiden in Black and the Monumental for some quick change. It's a common misconception that the weapon takes away or drains +20 souls from other players in PVP. However, this is not true and the opponent will always have the same amount of souls regardless of how many times you hit them. Also note that this weapon can not be enchanted.

This weapon can not be upgraded.