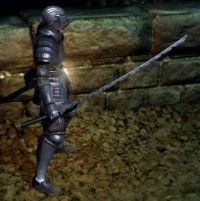 An ill-rumored katana mentioned in folklore, it is named for a giant in a distant country.

When its unique, long blade meets skin, it tears it apart into a wound that is said will never heal. It is a cursed weapon that devours the wielder's life energy, but despite this, warriors continue to be drawn to this katana.