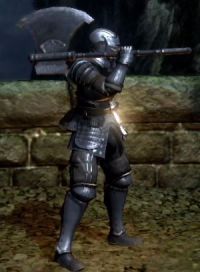 A large axe. A Cleaver.

Similar to an axe, it is very versatile but it's too heavy to wield with ordinary strength. Using that weight, this weapon blows enemies away.

The effect of a direct hit is also larger than that of a standard axe.

1. When two handing this weapon, only 18 Strength is required