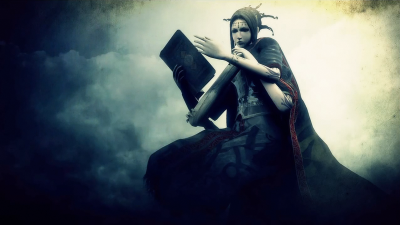 Special - Revives after death if the prisoner hasn't been killed beforehand

Fool's Idol is one of the most forgiving boss encounters. She never seems to be in a hurry to kill you, and as long as you have plenty of arrows and/or spices she should go down easily. One caveat, though: there is a prisoner up in the right church using a spell that can heal the boss, so the best way is to kill him and defeat the boss.

She has a more powerful Soul Ray spell than her clones, and she is also the only one to cast the Paralyze spell. The prisoners in the church will also turn towards and worship the real Idol. And finally, when locking on to the Idols (R3), the real one will not have a health bar above her head.

Try to grab the Baby's Nail weapon from behind the altar during the fight. If you are unable to then you can just go against the right or left wall after the fight and avoid going too near the altar. Pick it up and then approach the altar to continue to 3-2.

Applies to the Fool's Idol and Clones

Once you have killed the prisoner, you can enter the church to see a bunch of prisoners wandering around and the boss sitting at the altar. You can kill all the prisoners with a bow and/or magic, and as long as you don't get too close to the boss and she won't bother you. If you watch the ground, you will notice symbols appearing and disappearing near the beginning of the fight… If you step on them, you will be stunned for a few seconds, allowing the boss to stun you with magic. You could memorize where they are, or you could just stay on the edges of the level where it's safe. Staying on the edges also lets you take cover behind the pillars to avoid her magic while healing up. You can jump in and out of cover using magic and/or arrows if you want to play it safe, but if you are feeling brave, 2-handing weapons work wonders to finish the fight quickly, just watch out for the stun traps.

If you decide not to kill all of the harmless prisoners, you can use them for two purposes. They wander the floor and activate the invisible stun circles, relieving you the hassle of memorizing where they are. What's even better is that they only worship the real form of the boss, not her clones. When she starts creating clones of herself, pay close attention to the prisoners. They will always turn and raise their arms in praise in the direction of the boss. This is handy when doing sneak attacks.

As you beat on her, she will make clones of herself. The clones will fire small spells at you, while the real one fires the larger Soul Ray spell. Don't worry too much about if you are hitting the real one or not, as the clones will just disappear after you hit them a few times. You can always hit the obvious clones twice and wait for them to disappear, if you don't want to get hit when they are in close proximity to one another. Whenever you hit the real one, she will vanish in a ball of gold sparkles and reposition herself and her clones. You will know you're hitting a clone if they have a health bar - the true copy doesn't as she uses the bar at the bottom of the screen. Any easy way to exploit this is to R3 lock on. The clones will have a health bar, but when the real one is targeted nothing shows up. This can save time and give you a bit of breathing room as you don't have to get so close or use items. Melee players will have to resort to a bit of crossbow work I'm afraid, to flush her into a location which is easier for you to make lunges from. She sometimes teleports into the middle so wait behind a pillar for her to fire off some magic, then dash in and get a strong attack in until she teleports away again.

Must be in Soul Form. Clear the the first 2-3 Dreglings and stand behind either the last or the second last pillar from her. Use zoom to aim and fire one arrow, then immediately hide back behind the pillar, as she will cast Soul Ray. It's a little far, so aim slightly above and to the left of her shoulder. Repeat until she dies. The clone won't even appear.

Cast Anti-Magic Field. While the spell is in effect, all nearby enemies cannot cast spells.

Keep to the sides and find the true Fools Idol, by looking for the one with no health bar, and find a position where you can attack here without being vulnerable to the clones. Then hit her with a volley of three Flame Tosses in a row and retreat. Repeat.

After you dodge and skip around her paralyze tiles, simply run up to her and cast Firestorm. This will do a huge amount of damage and she will be done within maybe 3-4 casts. You can roll under her Soul Ray at the beginning of the fight, stand next to her and blast her with your Firestorm. Do equip your spell boosting gear (Monk's Head Collar, Ring of Magical Sharpness, Kris Blade). Going in Hyper Mode is also extremely effective. Equip a Straight Sword in your second Right-Hand slot, and if she isn't dead after your Firestorm , quickly switch to your Sword and continue to hit her until she disappears (which is practically impossible with this strategy)

After hitting her for the first time, when she reappears find which one is real. Get behind a pillar that is behind the way she is facing. Make sure she loses all aggro. Walk out behind her and if she doesn't start turning around blast her once with your best spell then get behind the pillar. When she turns all the way back around again she will not laugh and disappear! Keep doing this for a very easy win. The key is to walk out and make sure she doesn't start turning around, hence the Thief's Ring. If you attack her when she is turning she will laugh and disappear as usual.