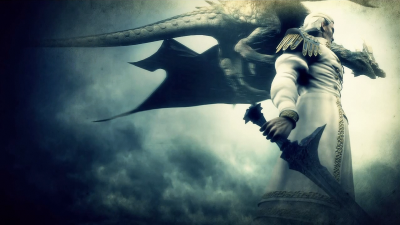 Old King Allant is highly resistant to magic and partially resistant to fire. He also is difficult to knock down or stunlock unlike most humanoid-esque enemies.

Equip Warding and Firestorm and make sure to wear Monk's Head Collar, Kris Blade, and Ring of Magical Sharpness for added damage. As soon you enter the room, cast Warding. Rush for the stairs and turn left (or right) immediately after. You should be in a corner. Wait for the king to charge you and as soon as he touches you, cast Firestorm. Kill him in Normal Game with two casts.

An easy, yet time-consuming method is to use Poison Cloud. As you enter the fog, wait for king to turn back facing the stair, walk to the top of the stairs while wearing the Thief's Ring. Cast Poison Cloud. Wait until it wears off. His health meter will stop moving, and you'll stop hearing the poison sound. Cast Poison Cloud. You'll need to repeat this six times, so a good deal of patience is required. Note: if the poison doesn't seem to be working, and you're sure you're close enough, try unlocking and then casting poison cloud and then locking on again.

As mentioned above, Old King Allant has a Soulsucker attack that can drain one soul level from you and might kill you at the same time. However, those souls aren't necessarily lost forever. Instead, if you die while fighting Old King Allant any souls that he stole from you will be deposited with the rest of your souls on your bloodstain. This also applies if he steals from you more than once and if he kills you with a different attack. For example, if he stole from you twice and you survived both times, but you died because of his explosion, you can recover the souls for both of those levels. However, if you die again without touching your bloodstain, those souls are then lost forever. If Old King Allant steals one of your soul levels and you beat him, you do not get back the souls you lost.

It is reported that when invading in 1-4, it is possible to enter the boss room while the host is fighting.