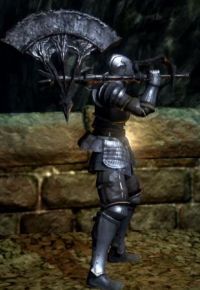 A tremendously heavy, and bladeless axe.

A weapon bourne from the soul of the demon "Vanguard".

Humans are crushed in one fell swoop from this axe.

A powerful weapon, but outclassed by other "uber" weapons due to lack of stat scaling and crippling weight. This of course being said, if you're willing to bear the weight, this is a powerful early weapon.

1. When two handing the weapon, only 20 Strength is required