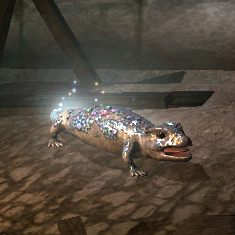 A Crystal Lizard is a small lizard which glows with a cool white light when alive. They are not hostile, but only run away when they notice you, and after running some distance they "burrow"/fade away and disappear. The reason you want to hunt them down is they always drop a nice selection of weapon upgrade stones (the specific type varies with each Lizard). If you are a new player who wants to get good custom upgraded weapons, then this is your notice that you really need to pay attention to the Lizards, since hunting them for their loot is the best way to maximize your upgrade stones without a lot of extra farming.