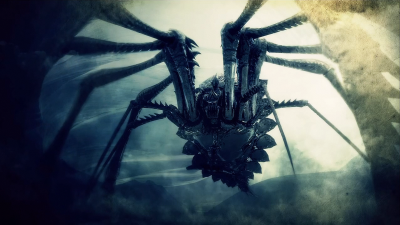 The Armor Spider, as a fireball spitting arachnid, is evidently well-protected against fire, especially Firestorm. For those determined to use melee despite her taking significantly more damage from magic, make use of the Sticky White Stuff you should have found earlier in 2-1. Alternatively, for those of a more ranged persuasion, the bow enchantment glitch (detailed in several other places on the wiki) can be used to make this relatively easy fight even easier. Ideal for melee would be a decent magic stat and a crescent/moon weapon, however on a character who has those kinds of magic stats, using ranged magic is just as, if not more, viable.

The Armor Spider has two different modes of attacks. She will use her ranged attacks while the player is in the tunnel and shift to melee when player makes it into her nest.