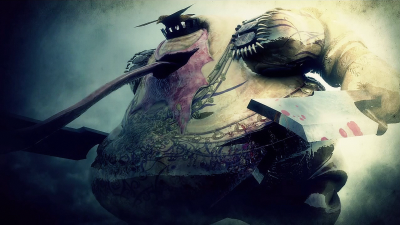 The Adjudicator is weak to magic and his head is vulnerable once he is knocked down.

At medium range and further the Adjudicator will lash out with his tongue. This will break away the upper floors, where falling blocks might land on his head and injure him.

If the player is on ground level, he will occasionally execute a chopping attack with the broken cleaver in his left hand. Periodically he will choose to swing with the bigger cleaver in his right hand in a horizontal sweep, while turning slightly. The attack is preceded by a bird call (from the bird that nests on his head).

The Adjudicator is in a small room with three floors. You start at the top, with a staircase to your right. You can fire at the Adjudicator from any of the tiers, but he will lash out his tongue at you and break away sections of the floor. If you insist on fighting from the upper tiers then it is best to hug the wall with the Thief's Ring on and don't stay still. The Adjudicator 's weak spot from up here is his head, specifically the brown bird nesting in his crown. It is best to look down and shoot him till he is almost below you, then quickly run to the other side and repeat. If you are lucky, his tongue will never hit you.

Note: If you keep your back against the fog-doorway, you will be out of range of his tongue lash. You can then walk out to the edge, shoot his head, and back-up to the doorway (rolling back also helps). This way you can kill him without ever getting hit.

As soon as you emerge from the fog, run to the stairs on the right. Run down them to the middle level. Start running around the level counterclockwise. After completing a half-circuit or so, cast Homing Soul Arrow. Start running again as soon as you can. After every half-circuit, cast Homing Soul Arrow again. The spell will automatically hit the demon and it will quickly kill him. With a powerful caster two casts are enough to kill the demon even in New Game++. There is no need to even look at him so you can concentrate on running. The role of the half-circuit is to get you out of his attack arc when you stop to cast the spell.

You will have to negotiate the stairs during your run. If you accidentally fall to the ground level, try to quickly get back to the middle level. Often you can make it if you keep cool.

As soon as you emerge from the fog, run to the stairs on the right. Run down them to the middle level. You can pace back and forth along a wall, or up and down the stairs to the bottom floor, while spamming his head with Fire Spray. If you choose to use the lower stairs, keep in mind the abrupt turn in the middle to avoid falling to the ground floor. Your Fire Spray attacks are more than likely going to miss his head while on the ground floor, so don't linger. Using the stairs can confuse the Adjudicator into indecisiveness as to which type of attack to use, causing him to miss you quite a bit. With enough points allocated into your magic stat, Fire Spray can eliminate the Adjudicator fairly quickly.

If you choose to go pure melee, attack the broken meat cleaver on his left front side. Hack away at it when he isn't telegraphing for a swipe. You'll know you are hitting it because blood will spray out and your weapon won't be rebounding off his fatty tissue. Wield your weapon with two hands, as he'll probably one-hit you anyway. Stay close to him and keep moving to the right, when he starts his swipe his left hand will move and allow you to get away. After hitting him enough times he will fall forward onto the ground for a short period of time. His weak spot is the brown bird nesting in his crown. Lock on and hack away without mercy. You might have to repeat this a few times before he goes down. Be careful of falling pieces of the floor, especially if you're fighting him with Phantoms (or if you are a Phantom). If someone stays on the upper deck he will shoot his tongue at them. Try not to be under the floor when this happens.

Also, a Phantom or two can easily distract the Adjudicator on the ground while a magic/bow user fires away from up above, without having to worry about getting smacked by his tongue. Try using a Sticky White Stuff if you can, as this really messes him up.

For ranged users, once on the ground level you can stay behind him, safe from attacks. If you back up a little bit, you can lock on to and shoot at his head, damaging him easily. A handful of arrows and he's dead. Also note that if he gets you stuck in a corner, you can roll away and run to the opposite corner and he'll turn around and walk towards you a bit before attacking again.

Note - When dodging his horizontal swing, make sure that you go completely around his left hand, since it also has collision, meaning you can't walk through it. If you don't, you'll get clobbered by his cleaver. Also, make sure that you don't run in front of him until his attack is completely finished and he begins to move his hand back. You can still get hit by the full force of the attack at the end of the animation (where his swing slows down).

Cast Warding if you have it. On NG+ and beyond, his cleaver attack will almost certainly kill you in one hit. With Warding activated, he will barely manage 500HP damage, even on lightly armoured players.